I write sweet and steamy rom-coms with tear-jerker happy-ever-afters.

Let the blood flow, the flesh burn, but never let the heart decide.

RED FOR BLOOD. GOLD FOR POWER.
These are the colors of The Brethren, the ancient seat of power for the race of Caros. Blood and power are the two things their kind desires the most.
Vampires were once Caros who chose to surrender their souls by taking a human's life.
Every Caro has one great weakness he must hide. A love for the sweetest music, for the tastiest morsels, or the silkiest skin - this weakness is the root of their most selfish actions, the reason behind their cruel words and cold-blooded ways.
But there is no greater weakness for this race than love.
Legends say that love is both a Caro's weakness and strength, a destructive force that must be avoided at all cost.
For when they love, they love passionately, completely, and eternally---
But when their hearts are broken, they seek revenge even to their dying breath. 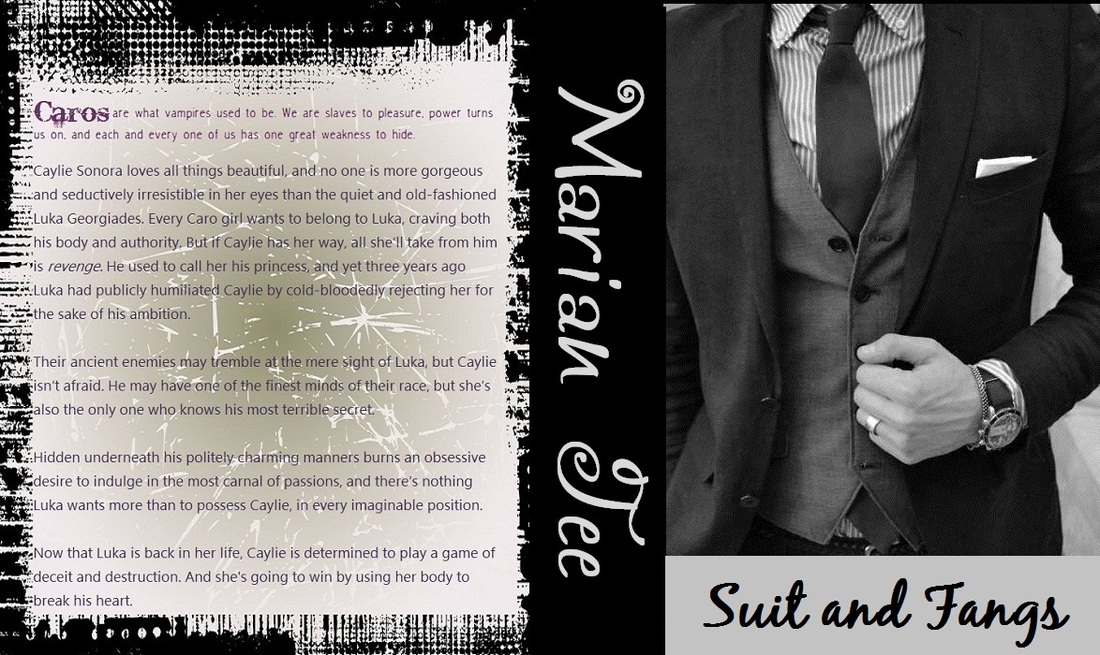 Note: The above cover is for promotional purposes only. I do not own the copyrights to the images or graphics used in it.

You first met Luka Georgiades in A Royal Heartbreak. He was a teenager then - in this story, he's already 19, but you'll see a lot of flashbacks from his past, some of them containing old and familiar faces...
I shared a little excerpt in one of my newsletters - of Luka and Caylie when they were still "best friends".
Below, on the other hand, are "excerpts" taken from Caylie Sonora's blog - It Girls Are Smart Too (hence the original title) - and another from the vlog of an ordinary Caro girl.

Hello, my lovelies! It’s a Wednesday again, which means we’ll be having a Just Ask Caylie segment. And for today – we have a very special question because it’s coming from a just-turned Caro.

If you do pick my question – thank you! I super need your help. I’m 16 like you but…UNLIKE you, I wasn’t born Caro. I became one when my mom married a full-blooded Caro and the Brethren approved our turning. In a few weeks, I’ll be attending school and I’m really nervous about it. My stepfather is a really cool guy but he’s only explained the technical stuff about being a Caro. Everything else – I have no clue and I’m scared I’m going to be a complete loser once school starts. Will it be obvious that I’m newly turned? What should I do or shouldn’t do to fit in? Please help!

Thanks for writing to me – I’m quite honored you’ve asked for my advice and I’ll do my best to help you.

Just so we’re clear, let me give you an overview of what Caros are first. Old readers, please, pretty, pretty please be patient - *flutters eyelashes* – this is a one-time post which will go to my FAQ section.


As for how to be cool---because that is what you’re asking about, aren’t you?

Don’t wear your heart on your sleeve.

We are hedonistic and passionate creatures but true love for most of us is taboo. Worse, as far as the elders are concerned love is TREASONOUS. So please do not be emotional in any way. Do you know that the best poker players in the world are Caros? For a Caro, it’s A LOT easier, safer, and less embarrassing to undress in public than show emotions. We feel more naked when our feelings are all out in the open.

And one last thing – sex to us is, like, a biological pastime. We are only be possessive about things - but not people and never ever just one person.

The video was black for a second before revealing a sniffing teenage blonde sitting on a huge black leather swing chair, an open Macbook Air on a glass-top study table behind her.

Her voice cracked when she spoke. “Our vlog today won’t have any good news, I’m afraid. What I’m about to share has come as an incredible shock, and I’m just…like, stunned. I learned this from a very, very trusted source. Luka Georgiades and Caylie Sonora are OVER. Not friends! Not anything!” The girl suddenly became silent, as if finally digesting the impact of her words. In a more subdued voice, “So, there goes our hope thinking that we Caros were about to have our own JFK-Jackie O. or Nicolas Sarkozy-Carla Bruni pairing since, like, forever.”

The girl sighed. “I was really hoping a girl like Caylie Sonora would breathe new life to The Brethren. It’s been too close-minded for thousands of years, prohibiting contact with other races, and they’ve been totally paranoid about human interrelations! Someone like Caylie at the side of who’s likely to be the Brethren’s future Advisor and second-in-command would be, like, the thing we need to get Caros back to the modern world.”

With another sigh, she waved her fingers at the screen. “That’s our breaking news update for today. As of now, the reason of the F.O. status between Luka and Caylie is still unclear but most people I’ve talked to says it’s because Luka is seriously training for the next Brethren elections, which – as you know – is four long years from now. Some say that Luka thinks Caylie is a distraction to his training.” She sniffed. “I know everyone’s saying that Luka Georgiades has, like, one of the finest minds of our race – and that’s race not generation, I know – but guess what? I think he’s the world’s biggest idiot for thinking someone like Caylie Sonora would be a distraction. Ha! She’s going to be his greatest inspiration…if he’s only smart enough to realize that before he loses her completely.”